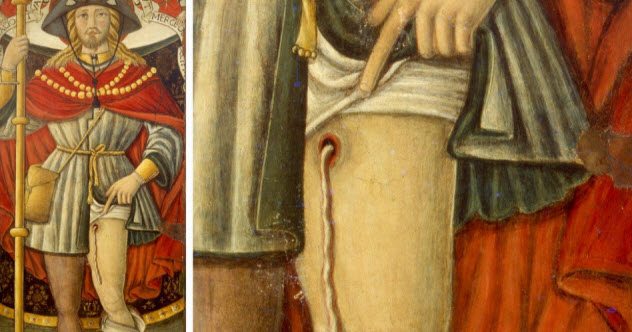 Ancient images played an important role in the past and are often mysterious until scholars adjust their view of history. Carvings can shatter the rules, defy explanations as to why and how they were created, and even become the odd inspiration for a conspiracy theory.

Painters and craftsmen reveal contemporary fears, personal experiences, and the aspirations of their clients. Then there are the unexpected and unique images that stun even the experts.

In a German museum stands an interesting lady. She wears only a loincloth, and her arm is raised while clutching a curved object. Nobody knows where the bronze statuette came from, but she was cast around 2,000 years ago.

At first, the woman was believed to be an athlete holding a strigil, a scraping tool used to clean the body. But why wield it in the air while staring at the ground?

Instead, researchers are optimistic that this could be an incredibly rare depiction of a female gladiator. Weapon-wise, the object also resembled the gladiator sword called a sica. The arm gesture fit with the salute that victorious fighters gave the crowd, and this could explain her downward stare—at a defeated opponent.[1]

Female gladiators in ancient Rome were a thing. Although they were banned in AD 200, ancient references noted that they fought fiercely and spectators were excited to see them.

She also had a bandaged knee, a common trend among gladiators. It is possible that the lifelike statue represented an actual woman in the past. If confirmed as such, it will only be the second art piece showing a female gladiator.

In Saudi Arabia, recently uncovered rock art depicts what could be dogs tethered to the waists of hunters. The carvings at Shuwaymis and Jubbah show animals being stalked by archers.

Dogs surround the men, appearing as medium-sized animals with erect ears, short noses, and curled tails. Possible ropes, drawn as simple lines, run from the dogs’ necks to nearby human hips. While the image of a leashed canine does not stand out, the oldest of its kind might.

The Arabian gallery is ancient. But there is no irrefutable way to date engravings, so researchers had to find another way to arrive at an estimate. They analyzed themes inside the scenes and compared them to known eras. The etchings included cattle and sheep, which meant that the dog owners belonged to a pastoral or herding community.

Although the first evidence of herders in the Arabian Peninsula dates to 5000 BC, native pastoralism is believed to be much older. If the team’s suspicions prove correct (that artists visited the site around 9000–8000 BC), then these are mankind’s first known drawings of dogs.[2]

When Yale archaeologists explored Elkab, an ancient Egyptian city, they stumbled upon an incredible place. Called El-Khawy, it was discovered during a 2017 expedition. Nestled among its many rock engravings were the earliest monumental hieroglyphs. They belonged to a time when Egyptian script was still taking shape.

Carved around 5,200 years ago, they were a valuable glimpse into the creation of the unique hieroglyphic system. Already, scribes wrote from right to left, the same direction as the later established form.

But that was not what shocked the archaeologists. The individual symbols were enormous. Single hieroglyphs stood over 0.5 meters (1.6 ft) tall compared to the 1–2 centimeters (0.4–0.8 in) of previously discovered writings. The symbols were not unknown, but they had never been found at this scale.

Since Elkab was an important presence in ancient times, it showed that the written word supplemented the communications used in the area. As other systems were merely small labels and tokens, hieroglyphic script was likely more widely used. This busts the belief that early Egyptian writing developed slowly and was limited to bureaucratic use only.[3]

7 Rebel From The Paleolithic

In 2013, a small slab was discovered at Spain’s Moli del Salt site. It was unimpressive—at first. After the grime was cleared, a carved tableau from 13,800 years ago rose to the surface. The simplistic picture consisted of seven structures resembling huts. If meant to show a prehistoric camp, it is the most ancient image of society ever found.

But it goes against the grain of Paleolithic art, which had strict stylistic themes of mostly animals, symbols, and people. The choice to draw architecture may have been an experiment to try social scenes or the work of a rebel who was sick of artistic boundaries.

Whatever the reason, the carver was different. He or she placed the huts in three levels in a likely attempt to create depth. Short of interviewing the carver, the interpretation of huts is not definitive.

However, studies conducted on recent hunter-gatherer tribes from all over the world revealed a strong similarity and preference for domed dwellings. The tendency to set up camp with 3–7 households also fits with the seven huts in the engraving.[4]

When archaeologists found a bead in a Greek grave, they put it aside. The unlooted burial from 1450 BC churned out better treasures, such as gold rings. The chamber was discovered in 2015 and was close to the ancient palace of Pylos.

Remarkably, the big bead proved to be one of the most jaw-dropping finds from the grave. A good cleaning in the laboratory revealed its true nature. It was a seal stone, a tool used to impress an image on a soft substance. Made of agate, it bore a three-man battle scene. It was done in striking detail, with some features so fine that the naked eye nearly missed them.

How and why the miniature was engraved on the hard gemstone, measuring 3.8 centimeters (1.5 in) long, is a mystery. It is difficult to imagine that this feat occurred without a magnifying device. But no such technology has ever been found on Crete, where researchers believe the masterpiece was made.

It was mounted to be worn like a wristwatch. Remarkably, a similar band is worn by the only victorious warrior in the scene.[5]

A monumental grave with the longest stone epigraph was recently excavated in Pompeii. Across 4 meters (13 ft) and seven narrative registers, the deceased’s life unfolds in pictures.

Marble figures portray his coming-of-age and wedding as well as sponsorship of games and celebrations. Meanwhile, a short biography mentions that he was one of Pompeii’s magistrates. Oddly, his name is nowhere to be found.

There is also an account about a public disaster. In AD 59, Pompeii held a gladiator event. During the games, tempers flared and a violent brawl erupted in the amphitheater. It was considered so serious that Emperor Nero ordered an inquiry into the incident. The Senate in Rome found several people guilty of incitement, and they were exiled, including a former senator. Pompeii was banned from holding gladiator games for a decade.

The story is already known to scholars, thanks to the writings of Roman historian Tacitus. The tombstone not only backs up Tacitus’s story but also mentions an unknown detail: Among the exiled were Pompeii magistrates. Their deceased colleague inside the tomb might have died during the amphitheater incident.[6]

Around 100 BC, an upper-class Greek woman died. Her tomb included a beautiful relief scene that showed the deceased sitting in comfort with a child in attendance. What caught the attention of conspiracy theorists was the object being held by the little girl. They claimed that she was holding an open laptop computer for the woman.

It looked like the woman was about to type in her Facebook password. Speculation went as far as identifying USB ports and suggesting that the statue was a prophecy of the Oracle of Delphi, who might have foreseen computers.

Historians are not impressed because the general agreement maintains that the object is a box. Experts at J. Paul Getty Museum, which owns the relief, suggested that it could be a jewelry case or a hinged mirror. The latter really existed during the woman’s time.

A professor from the University of Oregon had a look at the so-called “USB ports” in the artifact’s side. He identified them as drill holes meant to support an additional piece of art. Other scholars have reason to feel that there is no mystery. In similar funeral monuments, women are commonly shown in the act of selecting jewelry.[7]

Unlike its somewhat dull name, the Boxford mosaic is vibrant with action. The scenes swirl like a Roman action movie—an eternal battle between the mythical heroes and monsters.

Discovered in 2017 in the village of Boxford in England, the tiled wonder stunned archaeologists. Parts were recognizable. Hercules and Bellerophon, who was riding Pegasus, were waging battles with the Chimera and centaurs. Then the recognizable turned unusual.

In the corners of the 6-meter-long (20 ft) piece, Cupid, Atlas, and other mythical figures sat inside their own frames. Unlike most Roman mosaics, however, they leaned outside these frames.

Some elements were seen for the first time in a Romano-British mosaic, like the centaurs and Bellerophon winning the hand of his wife. The 1,600-year-old work contained inscriptions, a rare addition to any mosaic, and they remain undeciphered.

More intriguingly, the art was outside its usual social class. Mosaics were expensive status symbols, but the Boxford villa was unimpressive and small. Based on the crude finishing touches, the artists were not the best that money could buy despite rendering one of Britain’s most spectacular mosaics.[8]

2 A Painting Too Dangerous

Adrian Vanson was a Dutch-born painter who plied his trade in 16th-century Scotland. In 1589, he made a portrait of Sir John Maitland, a Tudor aristocrat. But it was not until 2017 that Vanson’s fear was felt.

When the painting was X-rayed, it was discovered that Maitland was not the original topic. Underneath was the ethereal drawing of a woman. Her looks and pose readily identified her as Mary, Queen of Scots. Contemporary paintings of the royal are scarce, and it is not hard to imagine why. Mary was a controversial and even hated figure.

Forced to abdicate in 1567, she was accused of her husband’s murder. Additionally, Mary was entangled in the religious politics of the day. Suspected of fomenting a rebellion, Mary was executed by her cousin Elizabeth I.

It was not a safe time to paint Mary’s face. Vanson’s portrait of the Scottish queen is incomplete, suggesting that he hastily abandoned the project after her death in 1587. After being hidden for nearly 450 years, Vanson’s painting, too dangerous for its day, was finally displayed at the Scottish National Portrait Gallery.[9]

In 2017, Italian researchers inspected a painting of Saint Roch. The 14th-century Frenchman was said to have cured people of the plague and then contracted it himself. He is often portrayed with a bubo, a swelling on the upper leg of plague victims.

The medieval painting was different. Saint Roch’s leg shows a wound dripping with a long white goo. In the past, the strange filament was thought to be pus, but the recent study authors are convinced that it was a worm.

The unknown painter did not use his imagination, either. This is possibly the earliest representation of a graphic parasite called Dracunculus medinensis. Also known as the Guinea worm, its larvae are ingested via infected water.

After a year’s incubation, things get horrifying. The person’s leg blisters, and a worm up to 1-meter-long (3 ft) erupts through the skin. Though not fatal, it is an excruciating experience.[10]

No cases are known from Italy, but it’s likely that the artist saw it firsthand. Many travelers from infected countries visited Bari, where the painting still resides.

The “fiery serpents” faced by Israelites during their exodus from Egypt could have been Guinea worms. At the time, they were rife in the Middle East and victims describe a severe burning when the parasite breaks out.

Read more fascinating facts about ancient art on 10 Stunning Ancient Reliefs and Stone Carvings and 10 Mysterious Images That Appear Across The Ancient World. 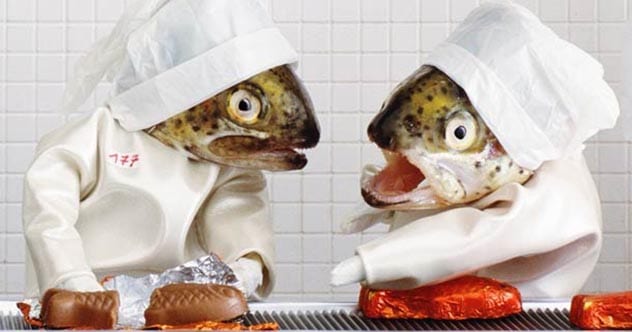 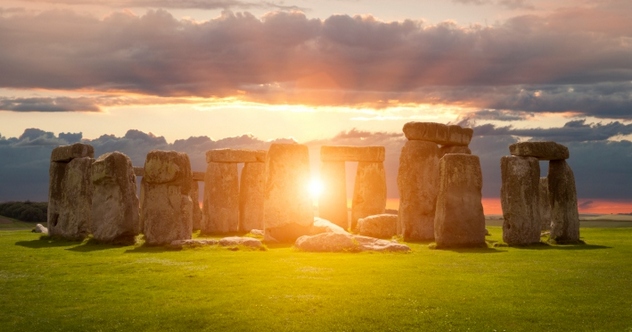 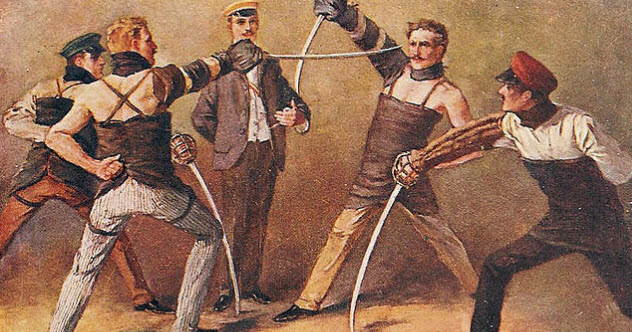 10 Incredibly Badass Moments From The History Of Art 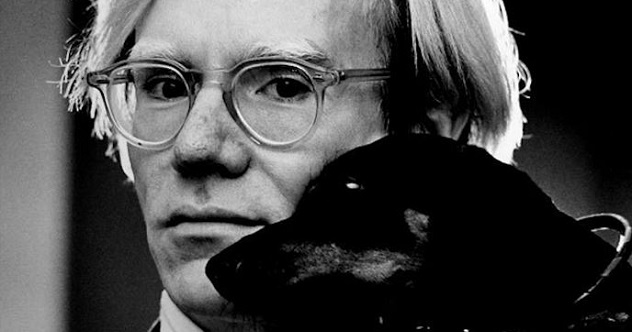 10 Masterpieces Whose Authenticity Has Been Disputed